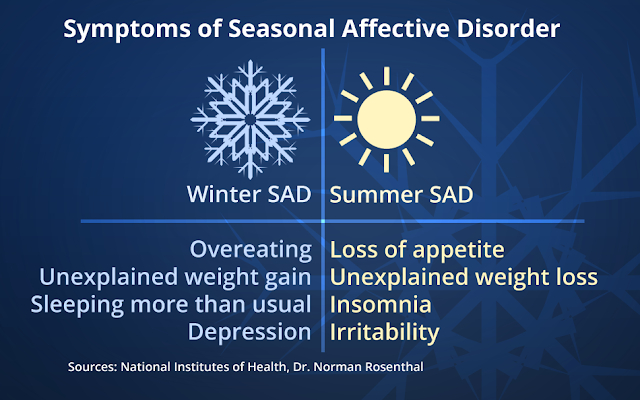 According to the Mayo Clinic online, seasonal affective disorder (SAD) is a cyclic, seasonal condition with signs and symptoms that reoccur around the same time each year. Usually, symptoms appear during late fall and progress on through the winter, only abating with the onset of longer and sunnier days.

Though, conversely, some people have developed the opposite pattern and become depressed with the onset of spring or summer, only feeling relief when that season wanes. But, in either case, SAD symptoms generally start out mild and progress in severity throughout the length of the season.

According to Mental Health America, formerly known as the National Mental Health Association (NMHA), SAD mimics many signs of depression, though it is actually a mood disorder that is related to the body's inability to adapt itself to varying amounts of sunlight.
The NMHA further offers the following facts about this serious and often misunderstood disorder.

Evidently, just as sunlight affects the seasonal activities of animals (reproductive cycles and hibernation), it may too influence human behavior in similarly cyclical ways. As seasons change, there is a marked shift in the human “internal biological clock,” or circadian rhythm, due in part to patterns directly linked to varying levels of sunlight. The effect is an internal clock that is in step with the seasons but out of step with year-round daily schedules.

Also, SAD sufferers seem to more easily produce increased levels of melatonin, a sleep-related hormone that is naturally secreted by the brain. It seems that sufferers excrete heaps of the hormone during extended periods of darkness, so, when the days become shorter and darker, they begin to crave carbohydrates, require greater amounts of sleep, become irritable, and develop a severe disinclination to boogie.

Of course, despite its pervasive grip on so many Americans, Seasonal Affective Disorder is notoriously difficult to diagnose and treat effectively due to its elusive and broad-ranging symptoms and almost entirely subjective level of suffering across those effected. Nevertheless, if the majority of the following symptoms listed below (from the Mayo Clinic on-line) are experienced, SAD may be the cause.

Notably, it is important to talk with your doctor regarding any concerns about mood instability or depression.
Particularly interesting are the symptoms of social withdrawal, appetite changes, and difficulty concentrating and processing information, as these symptoms do not necessarily point to long-term and pervasive suffering. The other interesting notation here is that there is currently no cure for SAD. Medication, light therapy, and weekly exercise regiment are only treatments for the disease.

Light therapy currently is the main treatment, and research is continuing to determine the most effective way to use it. There are two types of light therapy: bright light treatment, which makes use of a "light box" for a certain amount of time (usually in the morning), and dawn simulation, which takes place during the sleeping hours, utilizing a low-intensity light timed to go on in the early morning and get brighter with the waking hours.

It may take anywhere from three days to two weeks before a patient experiences positive effects from light therapy. However, discontinuing the routine will likely cause a relapse back into depression, as the goal of the light box is to reset the biological clock to a time of full sun, thereby triggering the brain to function at its highest levels of production.

Other treatments include the use of antidepressants, which may take as many as 6 to 8 weeks to become fully effective. Medication can be used with light therapy, but, as always, it is important to talk with a doctor before taking any medications.

Perhaps SAD is a little misunderstood, but it is very treatable if given proper time, attention, and understanding.