Bruising, a reddish or purple discoloration under the skin, most often results from trauma to the small blood vessels, called capillaries, but can also occur spontaneously. 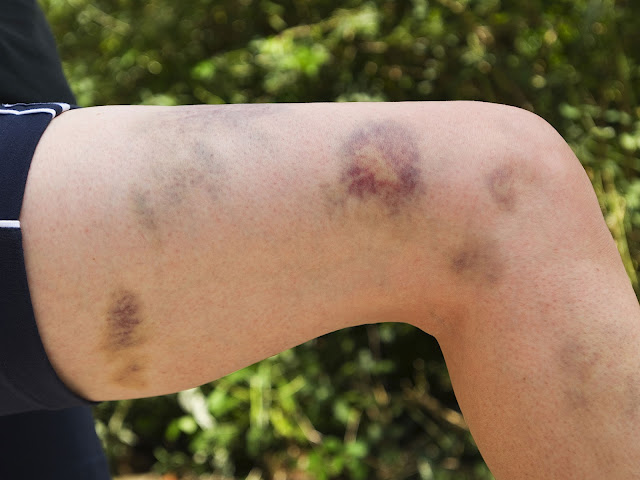 How and Why Bruises Occur

Blood leaks out of the capillaries and accumulates under the skin, gradually absorbing over several days. Bruising most often occurs because people run into objects or experience other trauma. Most bruising is easily explained, but frequent bruising that occurs without obvious cause needs prompt investigation, since several serious diseases can cause bruising. In general, women bruise more easily than men.

How Aging Increases the Risk of Easy Bruising

Bruising increases as people age for several reasons. Skin thins as people age and the capillaries become more fragile. The layer of fat that cushions blood vessels and protects them from injury becomes thinner as well. Older people often take medications and supplements that thin the blood and contribute to easy bruising.

Vision problems and poor coordination, problems that are more common as people age, may cause more frequent falls or bumping into furniture, resulting in bruising. Excessive sun exposure over the years also increases the potential for increased bruisability, since it damages the skin and makes it more susceptible to bruising.

Diseases that Cause People to Bruise More Easily

Bruising tendencies increase in a number of diseases. Acute and chronic leukemias in adults and children causes easy bruising because abnormal blood cells crowd out production of normal blood cells.

End stage liver disease, kidney disease and lack of vitamin C in the diet can also cause easy bruising, according to NetWellness.

Medications that Lead to Easy Bruisibility

Many common medications can increase bleeding because they disrupt blood clotting, which leads to increased bruising. ASPIRIN® and nonsteroidal anti-inflammatory medications, also called NSAIDS, commonly increase bruising as a side effect. Other medications, such as heparin, Coumadin and Plavix are taken specifically to thin blood to prevent heart problems and stroke.

Following Up on Easy Bruising to Determine the Cause and Treatment
Any unexplained bruising should be investigated, since several serious diseases can cause bruising. See a medical practitioner, who will most likely prescribe blood work to determine the cause.