Irritable Bowel Syndrome and How to Manage Your Symptoms

How IBS is Diagnosed?

Diagnosing IBS can be a lengthy and complex process, as no actual test for IBS exists. Many disorders of the stomach or bowel often have similar systems to IBS so must therefore be ruled out before any final diagnosis is made. When a patient consults their doctor with symptoms of IBS, the doctor will often refer the patient for tests for conditions such as coeliac disease, Crohn's disease or ulcerative colitis. 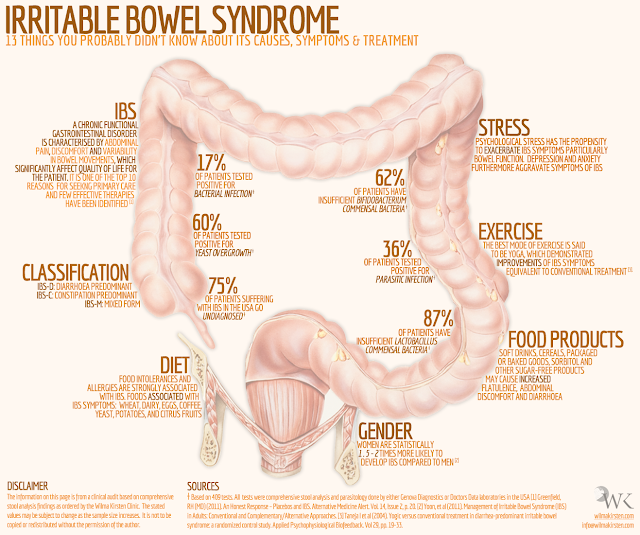 Occasionally in more severe cases, the patient may even be referred for a colonoscopy, an exploratory procedure of the bowel. Only when all other possibilities are ruled out can there be a diagnosis of IBS. Any abnormality in bowel movement or stools can be a sign of IBS.

The main symptoms of IBS are abdominal pain, often described as colic-type pain, stomach cramps, bloating, diarrhoea, constipation, flatulence and an urgency to go to the toilet. Other symptoms can include lower back pain, nausea, headaches, tiredness, mucus in stools and feeling particularly full after eating. Symptoms can vary depending on the person. Some people may only have a few symptoms and have periods where the symptoms flare up occasionally.

In more severe cases, IBS can be debilitating for the individual and has a profound affect their daily lives. It may prevent the sufferer from being able to go to work or do anything. Frequent flatulence in public or a sudden urgency to use the toilet and not being able to make it to the toilet on time may also be present and can be extremely traumatic on the sufferer.

The cause of IBS is unknown; however, there are many theories to what causes the condition and triggers symptoms. The most popular theory is related to diet, primarily because food consumed has a direct impact on the gastrointestinal system. Food intolerances and certain foods which has a direct effect on the digestive system may trigger symptoms of IBS. There is a theory that IBS sufferers have a colon or large intestine, that is particularly sensitive and reactive to certain foods, and also to stress.

Evidence has shown that there is a connection between IBS and stress or anxiety. Many sufferers relate symptoms to stressful events in their life. The relationship between the gut and nervous system is complex and it has been claimed by many studies that there is a part of the nervous system in the gut. A bacterial infection in the gut is another popular theory for being a cause of IBS.

How IBS can be Treated

Treatment for IBS symptoms can vary and depends on the individual. What is considered effective for one individual may not be as successful for another. There is no actual treatment for IBS, but there are many methods which are recommended for treating the condition. One recommended method is consuming probiotics. Probiotics are found in dairy products such as yoghurts and cheese, or can be bought in capsules. They are nutritional supplements that contain good bacteria which lives in gut. Limiting consumption of spicy or rich foods, caffeine, and fizzy juice or alcohol is also highly recommended.

Other recommendations include regular exercise, drinking plenty of water or herbal teas, peppermint tea or peppermint water, and decaffeinated drinks.

Peppermint and oat-based foods like porridge, oatcakes or oat-based cereals are good for bloating. Anti-spasmodic medicines relax the wall of the gut and relieve pain and discomfort caused by trapped wind or inflammation. Treating each symptom separately is also effective. Relaxation and complementary therapy techniques such as yoga and avoiding stress as much as possible will also help ward off IBS symptoms.

As anyone with any experience of IBS can testify, living with IBS is not easy but understanding and monitoring lifestyle and diet is a highly effective way of relieving symptoms and coping with the condition. It is recommended that when and how often flare-ups start be recorded in a diary and shown to a doctor as evidence so the symptoms can be more readily treated. A food diary is also recommended so that any any particular foods or drink that triggers an attack can be identified and known to be avoided in the future.