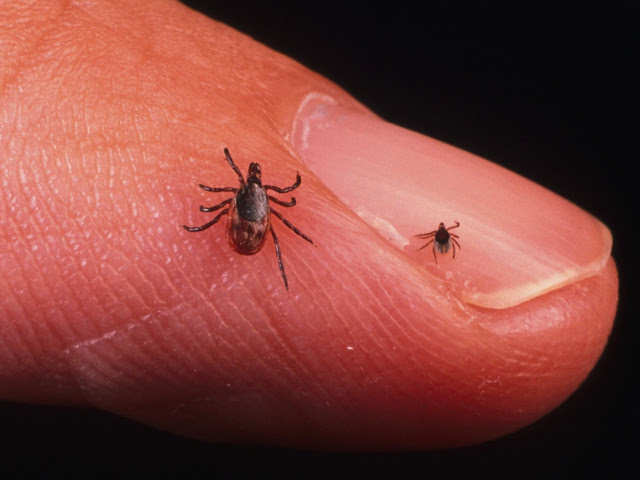 Lyme disease is an illness caused by bacteria from the species called Borrelia. This bacterium can live in the stomachs of deer and mice. When a tick feeds from an infected animal, they can become carriers of this bacterium. These ticks can spread the disease to a person by biting the skin thus allowing the bacterium to enter the human body. The disease cannot be spread from person to person. (Journals.uchicago.edu “Clinical Infectious Diseases,” accessed October 6, 2016).

Early symptoms of Lyme disease develop within days to weeks of the initial contact. The early symptoms include headaches, fever, weakness and fatigue. The area on the skin where the bacterium enter becomes inflamed with a red, circular, non-raised rash that eventually looks like a bull’s eye target. Not all patients develop this rash and the rash, swelling and redness can resolve on its own in about a month.

Other early symptoms may include muscle and joint stiffness and swollen glands or swollen lymph nodes. According to the Centers for Disease Control, “Lyme Disease”, most cases of the disease can be eliminated if treated early with antibiotics.

If the early symptoms are not treated, the disease can worsen and lead to more serious symptoms affecting other body systems. In a few weeks to months after the initial tick bite, the infection spreads throughout the body. The joints and the nervous system can become affected.

When the disease reaches the joints and nervous system, a person can experience numbness and tingling in muscles and pain and inflammation in the knees and other large joints. Other symptoms may include a stiff neck, light-headedness, confusion, nausea and vomiting and meningitis. Lyme disease can cause anxiety and extreme depression.

As symptoms progress, the patient can have blurred vision, drooping eyelids, sensitivity to light, dysfunctional movement and loss of muscle function. They can develop facial paralysis, also called Bell’s palsy, can experience hallucinations, can have speech impairment, can have decrease in consciousness and become unconscious.

The development of chronic arthritis, usually only in one or a few joints, is a common symptom of this disease. Other late symptoms of Lyme disease can be inflammation of the heart muscle causing palpitations and abnormal heart rhythm. If a patient is not treated effectively, Lyme disease can cause heart failure and death. (Mayoclinic.com “Lyme Disease,” accessed October 6, 2016).

Prevention of Lyme Disease
There are several defense measures that help prevent Lyme disease. One of these measures is to avoid any skin exposure while in areas where ticks live and thrive. These areas include wooded areas and areas with tall grass.

Another preventive measure is to spray exposed skin and clothing with insect repellent prior to engaging in outdoor activities. Other measures include wearing long-sleeves and long pants, and wearing boots while outdoors. Some ticks are very hard to see. Wearing light-colored clothes can help detect exposure.

Pets should be examined routinely for existence of ticks. If pets who acquire ticks play in or around an area where humans play in or around, these play areas should be treated with safe but effective products that eliminate ticks. Ticks should also be removed safely and effectively from pets.

If it is necessary to remove a tick from the skin, the area should be cleaned with soap and water immediately after removal. If a person feels like they are symptomatic of Lyme disease, it is important to get diagnosed early by a physician. Early treatment of Lyme disease is the most effective way to prevent it from becoming serious. (Cdc.gov “Lyme Disease Treatment and Prognosis,” accessed October 6, 2016).