Most people living in northern climates have heard about frostbite. Exposing the skin and underlying tissues, especially of the extremities including the hands and feet, to extremely cold temperatures can lead to the development of frostbite. If cold exposure is severe enough, tissues can actually die. 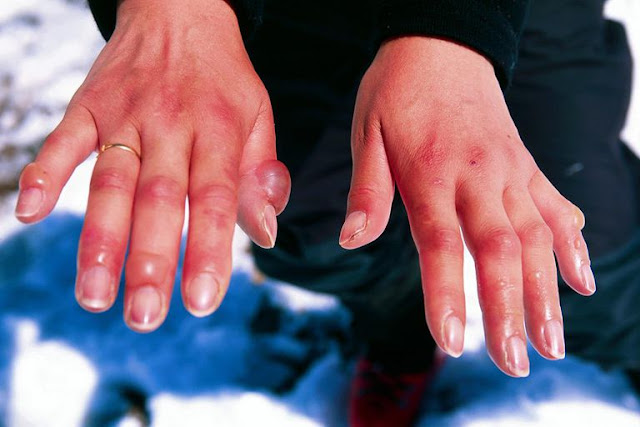 The body works hard to maintain the temperature of all of its tissues, both at the core of the body and at the periphery. Peripheral tissues such as the fingers, the toes, the ears, the nose and the lips are, however, at highest risk for damage as a result of exposures to extremely cold temperatures. When conditions are most dangerous, this extreme exposure can lead to the actual formation of ice crystals inside the tissues, first occurring near to the surface tissues just below the external skin, and then progressing to deeper tissue structures. When this happens, frostbite develops.

When ice crystals start to form in tissues, the cells that make up the tissues are not equipped to deal with its effects. Cells start to get injured because of disruption of cell membranes and the loss of cellular integrity. If the exposure continues, the body tries to deal with the exposure to the cold by regulating the performance of the circulatory system. Unfortunately, this typically means that the first response is to shunt more of the blood to the vital organs at the core of the body, worsening the cooling of the extremities. Soon afterwards, the blood vessels in the extremities try to overreact and start dilating and then constricting before the body recognizes that it needs to stop supplying blood to the extremities altogether to preserve as much heat in the core as possible.

As the freezing progresses, a reduction in blood flow and the damage sustained by the blood vessels themselves can lead to loss of oxygenation of the tissue, what is known as necrosis. When tissues stop getting the oxygen that they need, the tissue begins to die. After a frostbite injury it is not uncommon for surgeons to have to wait for several days before they can determine how much of the tissue has actually died. Injuries to tissues can be severe enough to warrant amputation, and rewarming of the tissues must be done carefully in order to minimize further injury.

When it comes to frostbite, prevention is absolutely the best approach. It is not simply enough to dress more warmly as the temperature drops. Awareness of overall conditions can be very important. For those into mountaineering, exposure to a low temperature at higher altitudes can be more rapidly destructive. Combining low temperature with exposure to water can also be extremely problematic. And frostbite is not only a province of winter extremes, it can occur in those people who work with dry ice or with liquefied gases such as liquid nitrogen and liquid oxygen.