Abdominal ultrasound uses high-frequency sound waves to acquire images of the abdominal organs. Unlike x-ray, ultrasound is non-ionizing radiation, so it has no known negative effects on the patient. It is often used in conjunction with other imaging modalities. Ultrasound, x-ray, and magnetic resonance imaging (MRI) image the body using different technologies, so each may be helpful in determining different properties of a mass for a more complete diagnosis.

Bowel gas hinders the visualization of the abdominal organs. When a loop of gas-filled bowel lies between the transducer and the organ being examined, an artifact called shadowing is seen on the image and obstructs the view of the organ. Patients who are scheduled for an abdominal ultrasound are asked to fast during the eight hours prior to the examination. This allows bowel gas to subside for optimal imaging.

Most likely, the patient will not need to undress for this examination. The patient's shirt will be pulled up around the chest and towels will be used to protect the clothing from the ultrasound gel. Ultrasound gel is water-based and will not damage clothing. Upon drying, it may look like a white splotch that can be easily removed. 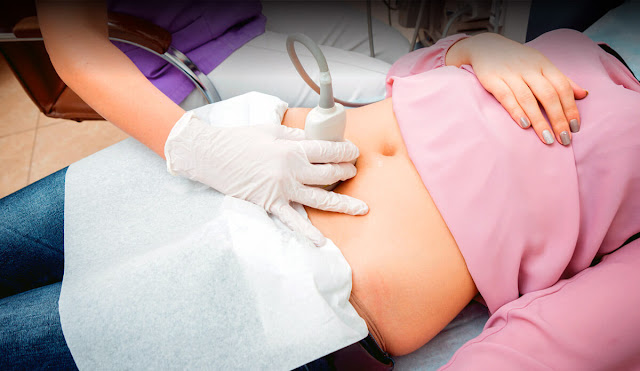 Bowel becomes more of an issue when imaging the spleen on the left side. The patient will most likely be asked to roll up on his or her right side to move bowel toward the right side of the abdomen. The size of the spleen is measured. It is usually enlarged in cases with mononucleosis. The kidneys may or may not be measured in images with the liver and spleen. A renal ultrasound is ordered if full examination of the kidneys is necessary.

Abdominal ultrasound is often used in children when radiation exposure is highly undesirable. It is often used to follow-up computed tomography (CT) or magnetic resonance imaging (MRI) examinations to better visualize liver ducts, to determine if a mass is cystic or solid, or to assess blood flow using Doppler.