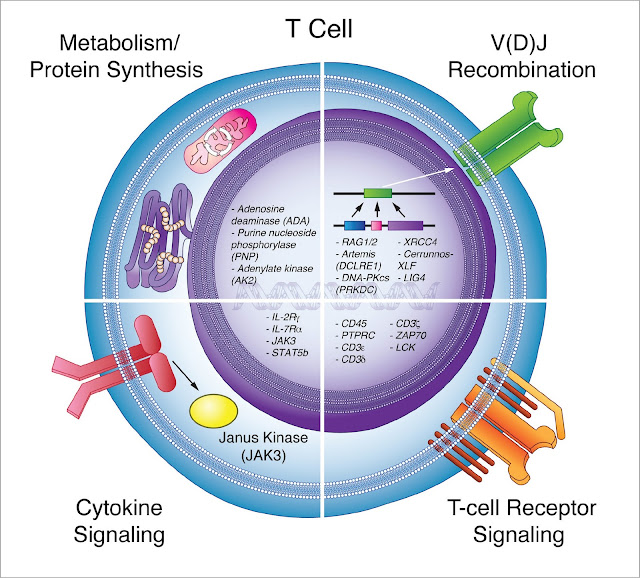 Severe combined immunodeficiency (SCID) is a genetic condition that is characterized by the absence of T lymphocytes; T lymphocytes are specialized white blood cells that develop in an infant’s thymus gland and then move into the bloodstream where they support the work of other immune cells.

Even if other immune cells are present in normal numbers – which is the case in some forms of SCID – they cannot function properly without the assistance of T cells. For example, B cells cannot effectively produce antibodies without receiving appropriate signals from helper T cells.
SCID occurs in one in 100,000 to one in 40,000 live births, but among certain populations it is much more common (among Navajo children, for example, the incidence of SCID approaches one in 2,500). SCID manifests in different forms – all of them caused by mutations in at least 10 different genes that produce at least four variations of the disease – but in all cases there is a paucity of T cells with a resultant loss of effective immune function.

Most infants who suffer from SCID develop serious opportunistic infections within the first few months of life, and – if left untreated – the disease is fatal before puberty.

Without an effective immune system, humans do not have an adequate defense against potential pathogens: bacteria, viruses, fungi, parasites, and even cancer cells can gain a foothold and spread unchecked unless they are recognized and destroyed by an army of fully functional white cells (leukocytes).

Because their immune systems are essentially nonfunctional, infants with SCID are at the mercy of their surroundings; they must live in protected environments (e.g., the "bubble boy") where exposure to infectious agents can be minimized.

By the age of six months, most children with SCID develop candidiasis (a yeast infection), diarrhea, pneumonia, or some other serious infection. Many will experience multiple bouts of infections by one year of age, and most will have received multiple courses of intravenous immunoglobulins (antibodies) and antibiotics.

Eventually, even with antibiotics, IV immunoglobulins, and other stopgap measures, children who do not receive definitive treatment succumb to overwhelming infections.

Although antibiotics and antibody injections are helpful for dealing with SCID and delaying its course, these therapies are not curative. Definitive management – one that cures up to 95% of children affected by SCID (if the disease is diagnosed before the age of three months) – involves the use of bone marrow stem cell transplantation.

Bone marrow taken from an HLA-identical sibling restores immunity in nearly all SCID sufferers. For infants who don’t have HLA-identical marrow donors, parental bone marrow that has been depleted of mature T cells can be used instead.

Since children with SCID don’t possess their own T cells – thus eliminating the possibility of a rejection reaction – they do not need to go through chemotherapy prior to bone marrow transplantation.

On January 21, 2010, the Advisory Committee for Heritable Disorders in Newborns and Children (ACHDNC) unanimously voted to add SCID testing to the uniform newborn screening panel. This addition to mandatory infant screening protocols – performed under the auspice of state health departments – is the first such change to ACHDNC guidelines in five years.

Cost-effective SCID screening methods that evaluate T cell numbers and activity were first investigated by researchers in Wisconsin and Massachusetts; these methodologies have been refined, and now several other states have begun training personnel who will be involved in SCID screening.

Severe combined immunodeficiency is a relatively uncommon but life-threatening disorder that is curable if diagnosed early in life. With new screening guidelines, more children who would have succumbed to this illness will now be given the opportunity to lead normal, healthy lives.