Since Lyme disease is the most common vectored disease in the US, possibly in the world, researchers are studying the organisms intensely. In the US, its causative agent is aspirochete: Borrelia burgdorferi. Borrelia requires both a tick host of the Ixodes genus and a warm-blooded host to complete its infectious cycle, reproducing inside both hosts. These bacteria are transmitted primarily by I. scapularis in the Eastern US, I. pacifica in the Western US.

After hatching, ticks pass through three life stages, each lasting about a year: larva, nymph, and adult. Ticks usually feed only once during each life stage. The transfer of Lyme Disease begins when a tick becomes infected by feeding on a vertebrate host with Bb. Inside the tick, the spirochetes are dormant. When the tick feeds on a new host, spirochetes reproduce, are passed to the warm-blooded host, and this host becomes infected. Spirochetes that remain in the tick become dormant again and wait for another feeding bout.

Ticks do not just transfer bacteria from one host to another. The ticks, the spirochetes, and the hosts are all altered by the transfers. The changes that Bb undergoes within the tick and the warm-blooded hosts are complicated, but knowing what they are will help understand why finding a vaccine against or cure for Lyme Disease is problematical.

Upon being drawn into a tick, the bacteria discard most of their surface proteins, produce new ones, attach to proteins on the surface of the tick's intestinal cells, and become quiescent. While quiescent inside the tick gut, the spirochetes manufacture only one or two variants of surface protein vlsE and possibly one variant of protein Osp. The change in nutrients and acidity when the tick eats again stimulates renewed bacterial reproduction.

A spirochete protein, BptA (Borrelia protein A) is needed for this reproduction to take place. The protein either allows the spirochete to utilize the fresh blood for nourishment or it prevents the hemoglobin newly released from the host cells from killing the bacteria. Bacteria in which BptA is inactive cannot reproduce and ticks that house the mutated BptA- strain of Bb eventually lose these spirochete symbionts.

When the Tick Bites 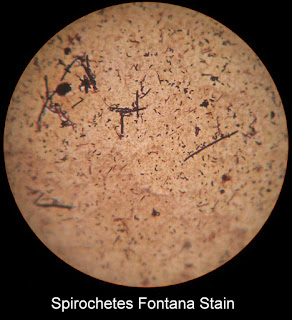 Tick saliva contains anesthetics that inhibit host awareness of the bite. Other chemicals in tick saliva stimulate an increase in blood supply to the area, inhibit the blood from clotting, and inhibit the host's immune system.

The introduction of fresh blood cells into the tick causes the bacteria to leave the tick's gut wall, stimulates spirochete growth and reproduction, and triggers rapid changes in spirochete surface proteins that the vertebrate host's immune system uses to fight off this disease agent. The bacteria also move to the tick's salivary glands and when the tick begins to spit the blood fluids back into the host, Bb is injected into its new host along with these fluids.

Over the course of the three or four days that the tick feeds, individual spirochetes produce up to five variants of vlsE proteins and one or two Osp variants. There are four possible combinations of the two Osp variants (A and B): no Osp, OspA, OspB, and OspA and B together. Mix those four combinations with several variants of vlsE proteins, and there may be well over a hundred different protein combinations on the surface of the spirochetesentering the new host. This means that the host's immune system is receiving a double whammy: being assaulted by the equivalent of 100 or more different types of bacteria at the same time that it is being attacked by tick salivary proteins that suppress its immune system.

Spirochetes have more time to alter their surface proteins toward the end of the tick's feeding bout making it important to have the tick removed as early as possible when a human or pet is bitten as their immune systems have fewer types of bacteria to identify and destroy. But this alone would not be sufficient to prevent Lyme disease. It is of utmost importance to obtain treatment early.