Other Effects of Obesity

Whenever there is talk about obesity, it is generally discussed alongside the risks for heart attack and stroke. In reality, there is a long list of conditions that obesity is associated with an increased risk for. While this article will not cover every single one, it will highlight some of the effects of obesity that people may be less aware of. 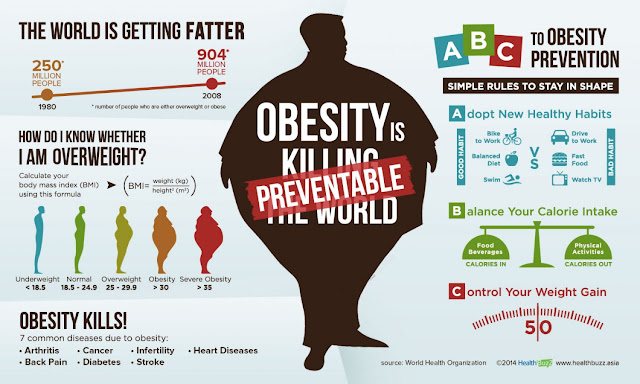 Sleep apnea is when you stop breathing momentarily in your sleep. It could be a central sleep apnea from neurological impairment or obstructive sleep apnea from your airway closing off. Obesity is a cause of obstructive sleep apnea because excess fat tissue around the airway and in your neck can make the airway easier to collapse. What ultimately happens is that you would be excessively sleepy in the daytime, enough to impair concentration and put you at risk for accidents.

Keep in mind that you do not need to be obese to have obstructive sleep apnea. Upper airway obstruction has other causes, including substances relaxing the throat muscles such as alcohol and anatomical causes like enlarged tonsils. Even thin people can have sleep apnea.

Another breathing problem could occur with obesity. If you were to be massively obese, the heavy weight of fat tissue in your belly could actually make it hard to take a deep breath. Over time, you would build up carbon dioxide in your system and also have a low oxygen level, which would lead to daytime sleepiness and fatigue. This is called obesity hypoventilation syndrome, also called Pickwickian syndrome. Though it has similarities with sleep apnea, do not confuse the two because they are not one and the same.

GERD, commonly known as acid reflux, can occur with obesity for the same reason as obesity hypoventilation syndrome. Weight from abdominal fat tissue can push the stomach upward, which then pushes its acidic contents upward into the esophagus. While medications for acid reflux can be used, they do not address the root of the problem.

There are certain areas of skin that fold, allowing moisture to collect if there is a lack of hygiene. They include the groin and the skin under the breasts in women. With obesity, another place would be the skin under the protruding belly. If moisture is trapped in these tight spaces long enough, skin inflammation takes place. This is called intertriginous dermatitis.

Obesity is associated with a long list of health risks, more than what is described here. While there are treatment options for each of the individual conditions, the best way to treat them is to lose weight and eliminate the root of the problem. Maintaining a healthy weight is more than preventing cardiovascular disease and other conditions. It is about living a long healthy life.