Antidiuretic hormone (ADH), also known as vasopressin, is an endocrine hormone that helps maintain water balance in the body. Triggered by dehydration, ADH is produced by the posterior portion of the pituitary gland and stimulates the kidneys to reabsorb water from the collecting ducts. This hormone also constricts the blood vessels to prevent the blood pressure from getting too low.

In some cases, an individual may have a dysfunction with ADH. This involves one of two conditions, both of which are described below. 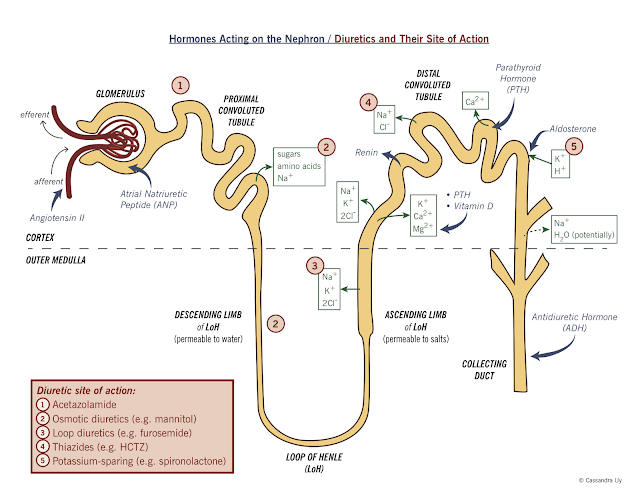 Whatever the cause and pathophysiology may be, DI is characterized by excessive urination (polyuria), sometimes during the night (nocturia), and frequent consumption of water due to ongoing thirst (polydipsia). The diagnosis of DI involves a series of laboratory tests, mainly the osmolality of the urine and blood. Patients with DI have very dilute urine (< 200 milliosmoles per kilogram) and very concentrated blood (> 287 milliosmoles per kilogram) because water is not reabsorbed back into the blood by the kidneys. In some cases, magnetic resonance imaging (MRI) of the brain and pituitary gland can help confirm central DI.

The treatment of central DI is replacement of the deficient hormone using vasopressin analogues, such as desmopressin (DDAVP). Other drugs, including but not limited to chlorpropamide and indomethacin, can be useful for nephrogenic DI.

The syndrome of inappropriate secretion of antidiuretic hormone (SIADH) involves the excessive production of ADH beyond necessary physiological requirements. A number of stimuli are implicated in SIADH, such as trauma, surgery, infections, various drugs, and even tumors that constantly secrete ADH (e.g., small cell carcinoma of the lung).

SIADH itself generally does not directly produce symptoms. However, patients with SIADH may experience symptoms such as lethargy, fatigue, and nausea as a result of low blood sodium (hyponatremia), a consequence of SIADH. A patient history may also suggest conditions that would lead to SIADH. To confirm the diagnosis, urine and blood tests should demonstrate low serum osmolality and high urine osmolality, provided that conditions similar to SIADH are ruled out.

Besides addressing the underlying cause, if possible, the treatment of SIADH involves a combination of methods to remove excess water from the body. They include restriction of water intake, diuretics to increase urination (along with electrolytes to replete those lost through diuresis), and vasopressin antagonists such as demeclocycline. For hyponatremia, measures to raise serum sodium, such as intravenous saline, may be helpful. All of these interventions must take volume status (hypovolemia, euvolemia, or hypervolemia) into account and be done gradually to avoid complications from rapid correction.