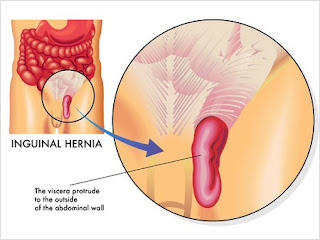 Hernias of any type do not self-correct – they require surgery to be properly repaired. One of the most common hernias in males is the inguinal hernia, which occurs near the groin area when part of the intestine protrudes through a weak spot in the abdomen.

If left uncorrected, a hernia will become larger in size, as well as more uncomfortable. The hernia is typically caused by heavy lifting or straining, paired with a weakness in the abdominal wall. Further lifting or straining can make the hernia worse, but as time goes on, even small amounts of strain such as blowing the nose or having a bowel movement can cause the hernia to expand.

The true danger in a hernia lies in the possibility that a part of the bowel will also poke out through the abdominal wall, leading to a strangulation of that part of the bowel and possibly death for the patient. While this is an unlikely outcome, patients who are suffering severe nausea and a sharp pain in the area of their hernia, rather than the usual sense of pressure, should consult a doctor immediately.

The hernia repair itself is quite simple – the intestine is pushed back into the abdominal wall and sealed up with a mesh. This is a day surgery procedure and usually takes less than an hour.

After the surgery is completed, there are several things which patients should expect to experience.

A pain medication such as Tylenol 3 is usually prescribed for after surgery, and can do wonders in the first few days to alleviate pain. There will have been a small incision made above the groin, which will have been stitched up and is usually covered with small strips that will come off in approximately one week.

There will be pain from the incision itself, as the body has undergone a moderate trauma in being cut open, and there is usually swelling of the incision area as well as one or both of the testicles. Tylenol 3 or other pain medication is used to both assist in the management of the pain and also to reduce the swelling. The time spent on the medication varies from person to person with some using it only for a few days and some for a week or more.

The important thing to know is that any heavy lifting or vigorous activity is out of the question for at least four weeks, or else the patient risks rupturing the same hernia again.

This is a natural consequence of the surgery. As the incision heals, it will become tight and stiff, and the patient will feel discomfort if they try to straighten up fully or walk around. Both of these things are key, however. Walking around not only gets the blood flowing, but helps the body adjust to the incision and the new state of affairs.

The temptation is to remain seated or lying down for the bulk of the recovery time, and while this is necessary to give the body a chance to rest, it is important to move around as well. A few walks around the house can make all the difference in helping to speed recovery.

When initially standing up, most people feel a "pulling" sensation, and will often feel a sharp pain as the incision shifts around. It is important to use the arms and legs as much as possible, rather than the abdominal muscles when getting up, sitting down or any other usual movement – this will prevent strain on the incision and limit the possibility of a re-tearing of the abdominal wall.

As mentioned above, walking around will usually result in a pulling sensation as the body will have become used to sitting or reclining. As long as movements such as standing up or walking are done in a slow and controlled motion, this pulling can be a good thing as the body gets used to the new incision site.

This is something that isn't always mentioned, but is almost a certainty, according to the May 8, 2008 article at UWhealth. Medication which is taken after hernia surgery, especially anything with codeine, tends to clog up the system. Add to that the fact that the abdominal muscles have been traumatized and that no "straining" should take place when in the process of a bowel movement and it can become quite a challenge.

The first thing to remember is that walking around will help alleviate this by getting the bowels moving. As well, eating foods high in fiber and drinking more water than normal will also be of benefit. If need be, a fiber supplement such as Metamucil can be used, but be careful if choosing to go this route.

Metamucil requires that even more extra water be consumed in order to work, or else the psyllium fiber in the capsules will make matters even worse. Any "harsher" products such as Ex-Lax should be avoided as they could put unnecessary strain on the stomach and abdominal region. A few days without a bowel movement after surgery is quite common, but if it reaches the four day mark, a call to the doctor may be in order.

While recovering from hernia surgery is a slow and sometimes painful process, knowing what to expect can make it a speedier and less intimidating process.

can i buy steroids online